Monday, Nov. 25, 2019: Public Debate on the merits/negatives of nuclear energy. 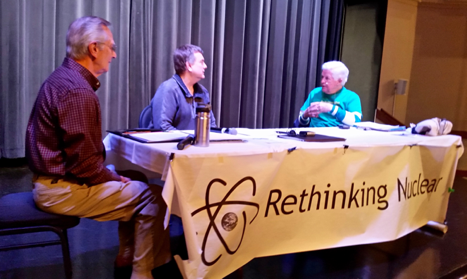 We began with an assumption, that the mining and burning of coal to make electricity globally, must be eradicated. (We accept that some coal mining will be needed in future for the production of steel and coke.)

Richard posed that nuclear energy is stronger and more reliable than solar or wind energy, and that it should not be excluded by those arguing for “100% renewables”. Excluding atomic fission from supporting our electric grid would probably keep us from breaking our addiction to fossil fuels, and leave us vulnerable to uncontrolled climate change.

Tom countered by pointing out that nuclear power’s high cost has thwarted the construction of new atomic reactors in USA for decades, and it continues to distract us from our pursuit of perfecting the generation and storage of solar and wind energy.

As we fielded questions from the audience, we appreciated that both modalities of generating carbon-free energy, solar and nuclear, are in conflict. Tom wants more money spent on energy storage, important for leveling out our need for intermittent wind and solar energy. Richard wants better understanding and less fear of nuclear energy from the public, so we can proceed with new, advanced reactors that consume our safely stored, unspent fuel (sometimes called waste).

Tony closed the debate by asking for a show of hands by those who felt they had learned something new this morning. Everyone raised their hand! Then Tony asked how many people felt more positive about atomic fission energy after the debate. We didn’t count the many hands, but our impression was that a strong majority did feel more positive. Then Tom and Richard shook hands, determined to maintain our conversation into the future.