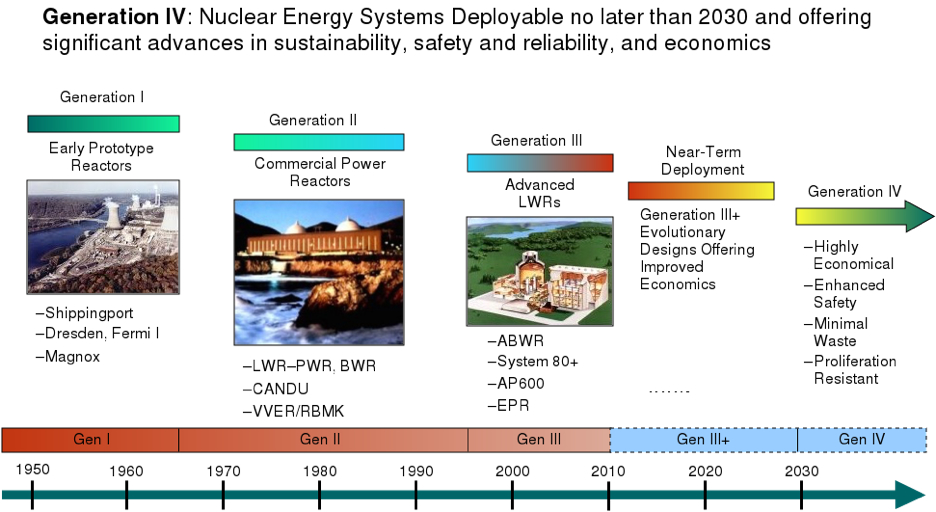 There is an urgent need to have safer, more efficient designs available as soon as the oldest of our fleet of mostly 2nd-generation reactors are decommissioned. There are a few 3rd-generation reactors under construction now, but they are costly, and often slow to complete, largely due to design changes after the accident in Fukushima, Japan. Fortunately, there is a new generation (IV) of very efficient and often smaller reactors already on the drawing boards. They are characterized by special features that allow higher neutron energies, more efficient consumption of most of their fuel, including “spent” fuel left over from 2nd-generation reactors, and inherently safer cooling. These properties should obviate public concerns about the accumulation of radioactive waste, and the remaining residue will be radioactive for only a few centuries, instead of millennia.

There has also been enthusiasm for building small modular reactors (called SMRs) that can be readily assembled on site from mass-produced components. Not all SMRs are 4th-generation, and the first one to be approved (NuScale) will be cooled with water, and therefore still of 2nd-generation design, but very safe. Meanwhile, China and other countries are already moving ahead with 4th-generation designs.

There has also been much talk about an alternative fuel, thorium, which is more abundant on earth than uranium, and which does not need to be enriched before use. Among the 6 or 7 designs that fit within the 4th-generation category, thorium has been proposed for 2 of them. One takes the form of thorium coated with a ceramic material into “pebbles” that slowly pass through a vessel of hot water, so this design has been called a pebble-bed reactor. Another design involves the use of a molten (hot) fluoride salt of thorium which can be operated continuously without requiring shut-down periods for refueling.

Finally, a word about the famous “breeder” reactors that were built in Idaho back in 1951 (model 1) and 1964 (model 2). Cooling was provided by liquid metal, which absorbs heat much better than water, allowing operation at higher temperatures but normal pressure, and eliminating the need for an outer containment vessel. The most important feature is the high average neutron energy, 100 million times higher than in the “thermal” neutrons in water-cooled, 2nd-generation reactors. This allows the reactor to make more plutonium than it consumes, hence the term “breeder”, and it allows most of the fuel to be fissioned (consumed) and vastly reducing the volume of waste.

This pioneering work, although cancelled in 1994 by Clinton and Gore, has evolved into the broad concept of “Generation IV” reactors, with the following features:

Once informed of these many advantages, the public will be less inclined to fear nuclear energy, and will have every reason to embrace it as the ideal substitute for methane and coal, even at existing steam turbine sites.